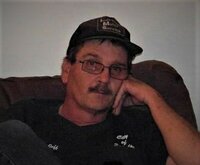 Jeffrey Scott Richie was born to Doyle and Sandra Richie, in Sapulpa, Oklahoma, on August 30, 1961. He lived in the Sapulpa area all his life until his passing on December 04, 2021. Jeff is described as the definition of a truly simple man. He was happiest spending time with his family at home and enjoyed watching western movies. He was humble and appreciated the simple things in life. He reserved his Saturdays for his grandson Shocka, age 7, they were the best of friends. They started their day with breakfast at Steak & Eggs and after spending their time, they would always end up at Braum’s for ice cream and chicken strips before heading back home. Jeff worked for the city of Sapulpa for over 30 years as the supervisor over the waste management department. He was a trustworthy man who held the keys to the city. Jeff is survived by his wife Sherry Bacon-Richie and stepdaughter Donna Bacon; 4 grandchildren: Sidney Bacon, Mysterikal Brown, Serenity Brown, and Shocka Brown; 1 great grandchild Ace Bacon-Calhoun; 2 sisters: Marcella Richie and Shelia Jurak; as well as many nieces, nephews, aunts, cousins, extended family, and even children that have called him dad for years: Sissy Scroggin and Kenny Riley. Jeff was preceded in death by his parents: Doyle and Sandra Richie (Miller).