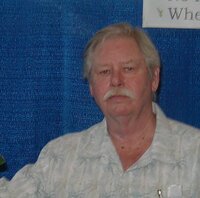 Donald Eugene Bundy was born on December 10th, 1943, to Grady and Viola Bundy. Don has been fighting cancer for over 4 years. Don passed away on February 11th at his daughter’s home in Sapulpa, Ok. Don was born in Olympia, Washington. His family moved to Tulsa, Ok where he met and fell in love with his wife Caroline of 58 years. They were married on August 17th in 1963. Don and Caroline began an amazing journey where they lived in Venezuela and Scotland as well as many U.S. cities. Don worked as a welder for Chicago, Bridge and Iron, and eventually was promoted to Quality Control during his employment and travels. Don eventually retired from CB&I and went into business for himself. He opened up a gas station in Jennings, Ok. This was the beginning of his entrepreneurial journey. Shortly after, Don went into business with his brother Ron. They started building tanks, and then moved into the automotive industry building after-market automotive truck bumpers. “Bundy Bumper” Don was the proud owner of Bundy Bumper, Mid-America Automotive, Rotating Gardens, Ornamental Brass Works and Mid-America Shelters. Don took great pride in his businesses. He was always looking for the next venture. Don was always analyzing products and thinking of ways to improve upon them. He was always doodling on napkins and drawing ideas that he came up with. You could often find him, “deep in thought”! Don owned and operated his business, Mid-America Automotive here in Sapulpa since 1991. After he sold his company, he went on to start many other businesses. His nature was to stay busy and to keep working. Don was preceded in death by his parents Viola and Grady Bundy. His brother, Ronald Bundy, Leo Bundy, sister Yvonne McKay, and Darlene Holland. Don is survived by brother Larry Bundy of Houston, Texas, Hugh McKay of New Braunfels, Texas and sister Wanda Young of Gore, Ok. Dons’ wife, Caroling Bundy of Sapulpa, Ok. Daughter Betty Villarreal and husband Enrique Villarreal of Rockport, Texas. Son, Troy Bundy and wife Lori Bundy of Tulsa, Ok. Daughter Donna Shanahan and husband Mike Shanahan of Sapulpa, Ok. Grandchildren Brian Bundy, Sarah Shanahan and Jacob Shanahan of Sapulpa, Ok. Emily and Haley Bundy of Tulsa, Ok. Great Grandchildren, Natalie, Zack, Katy, and Hailey of Sapulpa, Ok. Freya Shanahan of Sapulpa, Ok and Bowie Shanahan of Naples, Florida.