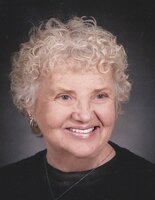 Cecelia “Sue” Holden passed away Monday, February 28th, 2022, of natural causes at Southern Oaks Care Center in Pawnee, Ok. “Sue” was born October 27th, 1942, in Pawhuska, Ok. The Youngest of 4 children (Denver, Joanne, Jenny) and the daughter to Denver Lamont and Genevieve Cummings Curry of Pawhuska. “Sue” attended Catholic School and graduated from Pawhuska Class of 1960. She formed many lifelong friendships, especially one with Mary Margrett. From Grade school up until Sues passing they stayed in touch. “Sue” and Melvin Dooling of Hominy were married, and the couple moved just outside Murfreesboro Air Force Base where Melvin was Enlisted. Shortly thereafter they had a son Patrick Dooling who passed away due to complications after birth. They would go on to have and raise three more children all girls, Christy, Mary, and Bridy. “Sue” and Melvin later divorced. “Sue” re-married to Rodger Holden of Pawhuska. The two moved to Talala, Ok in 1991, where they spent nearly 30 years enjoying the grandkids, camping trips to Montana and Texas, Attending Church, Horse Shows, and Family. Shortly after graduating Beautician School, “Sue” would go on to own and operate several beauty Parlors and Salons. Sue was an artist, sculptor, painter and even a musician. Sue was a proud and devout follower of Christ, Eager to share the word at the slightest of opening in conversation. “Sue” was a mother of 4, A Grandmother of 9, and a Great Grandmother of 9. She was a western folk artist. She was truly a light, who will forever be loved and missed in our hearts.