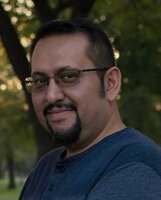 Ricardo Romero, 47, of Sapulpa, Oklahoma, passed away on March 23, 2022. He was born August 11, 1974, to Francisco and Dolores Romero in Pharr, Texas. In 1992 Ricardo graduated from Clark High School in Whiting, Indiana and went on to study Fine Arts at Indiana University in Bloomington, Indiana. In 1997, Ricardo met Paula on the campus of Indiana University. They went on to have three children: Isaac, Jacob, and Mia. In 2009 Ricardo moved his family to Oklahoma where he worked in Information Technology Support. Ricardo was a loving husband and father who enjoyed playing video games, watching anime with his children, spending time with his wife, cooking, and drawing. Ricardo was preceded in death by his paternal grandparents, Francisco and Maria Luisa Romero and his maternal grandparents, Rufino Jimenez and Dolores Luna. He is survived by his wife, Paula Romero of Sapulpa; his children: Isaac, Jacob, and Mia Romero of Sapulpa; his parents, Francisco and Dolores Romero of Hammond, Indiana; sisters, Marcella (Alex) Long of Sapulpa, Frances (Abel) Zavala of Cincinnati, Ohio; brother, Cesar Romero of Hammond, Indiana; and several aunts, uncles, cousins, and a niece. Ricardo was loved and will be missed by all who knew him.