All of our licensed directors adhere to the highest standard of ethical practices and are committed to ensuring that all of your needs are attended to. Commitment to the community and genuine compassion toward families are but a few of the characteristics that make them outstanding in their field. We are proud to have them on our staff. 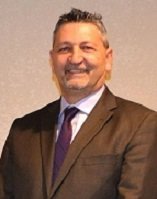 Tom Dugan is the owner and managing Funeral Director at Green Hill Funeral Home and has been employed here as manager since 1998. Tom also has an insurance license which he acquired to better serve his client families. He purchased Green Hill Funeral Home, Green Hill Memorial Gardens, and Green Hill of Owasso in December 2016. Tom grew up and went to school in Kiefer where he was active in both academics and athletics.  Following high school, Tom went to college at East Central University in Ada, where he received his Bachelors of Arts Degree in History Education. Later Tom attended Central State University in Edmond to acquire his Bachelors of Science Degree in Funeral Sciences.  Beginning his career in the funeral profession in 1989 here in Sapulpa, Tom has always remained an active member in the community in and around Sapulpa.  Tom has raised his two boys; Drake and Bleys, both who have attended Sapulpa Schools and is married to Michelle (Johnston) Dugan.  Michelle also grew up in the area, graduating from Kiefer High School.  Michelle has 3 children; Garrett, Sydney and Blake.

Green Hill Funeral Home and Cemetery is proud to be the home of long time local funeral director, Joe Nichols. Joe moved to Sapulpa in 1969 after graduating from the Dallas Institute of Funeral Science.  Born in Holdenville, Ok and graduated from Holdenville High School, Joe attended Central State University in Edmond before going to mortuary school.   Joe, together with his wife, Linda raised two children who attended Sapulpa schools; son, James who is currently employed with Creek Nation in Okmulgee in Emergency Management and also is a licensed embalmer and funeral director and daughter, Jennifer who is an RN working for OSU Medical Center. Joe has lived in Sapulpa since 1969 loyally serving area families in their times of need.  Joe has been employed in the funeral profession since 1966.
Joe has been with Green Hill Funeral Home since November 2010.  Joe brings his extensive knowledge, experience and expertise to the already excellent and caring staff at Green Hill..