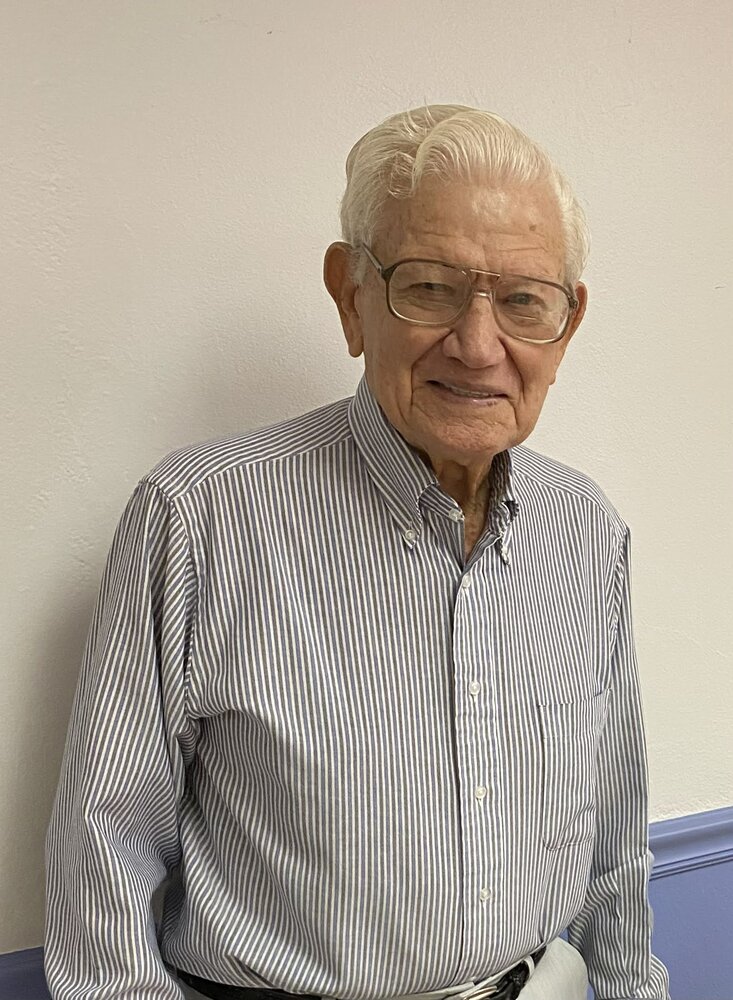 Please share a memory of Charles to include in a keepsake book for family and friends.
View Tribute Book
Charles Jake “Popa” Satterfield was born in Mountainburg, Arkansas on October 10, 1924. Surrounded by his “3 girls” he passed peacefully from this world into Jesus’ arms on Tuesday, December 14, 2021. Jake graduated high school in Mountainburg where he met his future wife, Dorotha. In 1944 (WWII) Jake joined the Navy CB’s where he helped build “floating harbors” in the Normandy Invasion. He shook hands with Winston Churchill. Jake said that “Churchill was down to earth with us boys.” He never shared any of this with his family until he turned 90 years old. He said it was too painful for him to talk about. Jake’s family is very proud of his service and thankful that he shared his experience with his family. After returning home from the war in 1948, he married Dorotha. On December 6, 1956 they adopted their one and only daughter, Terri Ann. Jake would tell anyone and everyone how happy he was that they adopted such a wonderful & loving daughter. Jake & Dorotha were blessed to have 73 years together. Jake worked for Frisco Railroad (now Burlington Northern) for 40 years. At his retirement in 1988 he was the signal maintainer in Sapulpa. In the mid 1970’s he decided to brick his & Dorotha’s home in Sapulpa. Several contractors told him he couldn’t do it himself, but he did it-complete with a brick fireplace. Jake was very active in the First United Methodist Church of Sapulpa for over 50 years. He was an active member of the Methodist Men’s group and ramrodded the famous “Fish Fry” dinners for many years. From 1988 through 2000 he mowed the church yard. He loved his church family and always wanted to help with everything going on, including the Pumpkin Patch. In 2014, he got promoted from Popa to Great-Popa. His first great-grandchild was named after him; Jake E. He loved & adored his two great-grandsons. They were the light of his life. He is survived by his loving wife, Dorotha of Sapulpa; daughter & son-in-law, Terri Ann & Dennis of Sapulpa; granddaughter & grandson-in-law, Leslie Ann & Mike Schmidt of Sapulpa; great-grandsons, Jake Eugene & Keyton Dennis Schmidt of Sapulpa; and grandson, Michael Wadley and family. Visitation will be held at Green Hill Funeral Home in Sapulpa on Thursday, December 16, 2021 from 4-8pm. A military service will be held for Jake on Friday, December 17, 2021 at 1:00pm at the First United Methodist Church in Sapulpa. In lieu of flowers a memorial fund has been set up at First United Methodist Church of Sapulpa.
To send flowers to the family or plant a tree in memory of Charles Satterfield, please visit Tribute Store
Thursday
16
December

Look inside to read what others have shared
Family and friends are coming together online to create a special keepsake. Every memory left on the online obituary will be automatically included in this book.
View Tribute Book
Share Your Memory of
Charles
Upload Your Memory View All Memories
Be the first to upload a memory!
Share A Memory
Send Flowers
Plant a Tree