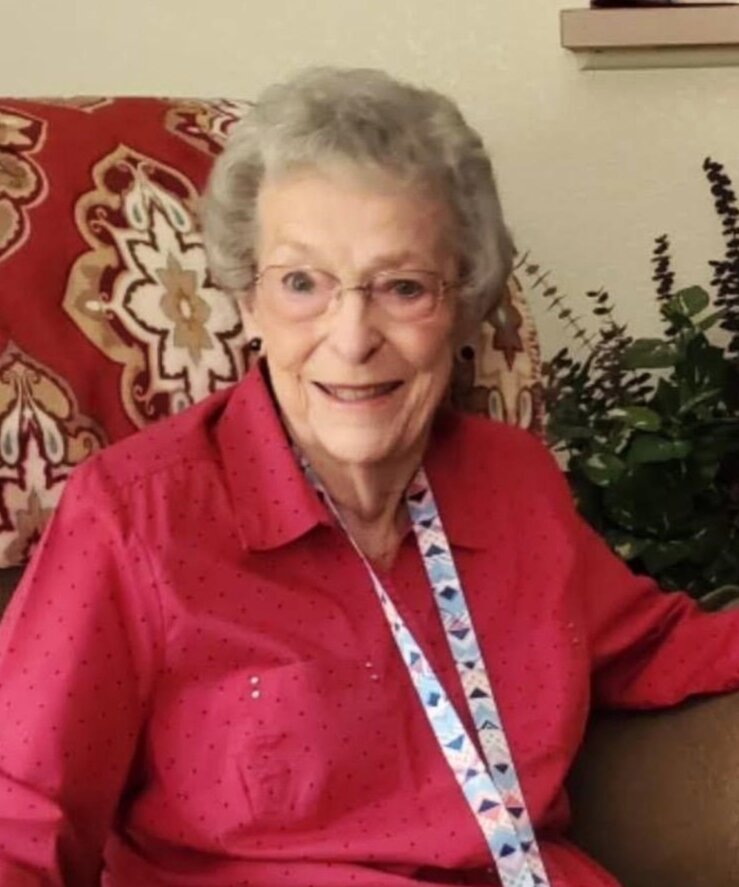 Please share a memory of Rona to include in a keepsake book for family and friends.
View Tribute Book
Rona Lee (Sandifer) Dawes took her first steps in her new Heavenly home to be with the Lord and reunite with her loving husband on Thursday, April 7, 2022. She was born June 27, 1931, in Tulsa, Oklahoma, to Harold & Juanita Sandifer. Being the oldest child, she took great pride in being able to care for her younger brothers, Vern and Gene. While working as a soda jerk at a Walgreens in Downtown Tulsa she met the love of her life, Richard Lee Dawes, more affectionately known as Dick. The two were married on September 3, 1949 in Sapulpa, OK. They enjoyed camping, fishing, and spending time with family. After settling in Tulsa they welcomed the first of their four children in 1951. They enjoyed 36 years of marriage before Dick’s unexpected passing in 1986. Rona was a homemaker for many years and then turned her love of fishing into a career, when an opportunity presented itself to work the overnight shift at Zebco, building the classic Zebco 33 reels. Eventually moving to days and expanding her knowledge to other Zebco reels, she developed meaningful relationships with coworkers and remained friends for many years. Rona retired from Zebco after 23 years of service. Years later she found herself missing the work and started repairing reels from home. Rona loved life, enjoyed fishing, playing bingo, visiting the casino, was an avid college sports fan, visiting with her brothers, and loved a good joke from time to time. She was very proud of the large loving family she and Dick had built. Lovingly known as Meme Dawes or Big Grammy; she very much enjoyed watching kids, grand kids and even great grandkids play ball, rodeo and other activities. She relocated to Sapulpa, Oklahoma in 2011 and quickly made friends with fellow residents at her apartment complex, Hickory Crossing. She enjoyed the monthly social events including ice cream socials, music nights, potluck dinners, watching football games and evening chats with the ladies.   Rona was preceded in death by her parents, Harold & Juanita Sandifer, her husband, Dick Dawes, her brother Vern Sandifer, and youngest daughter, Renea Prince. She is survived by her brother, Gene Sandifer of Henderson, NV; niece, Vicky McClaflin of Sand Springs, OK; son Richard Lee Dawes Jr and wife Cindy of Miami, OK, daughter, RoAnna Lynn Berry and husband George of Tulsa, OK, daughter, Rhonda Sue Walker and husband Louie of Sapulpa, OK; grandkids: Ricky Dawes, Chad Dawes, Stephanie Archambeau, Geoff Berry, Johnny Walker, Jordan Walker and Patricia Bridgewater; sixteen great grandchildren and a host of extended family and friends. Rona’s family have many wonderful memories of time spent together. Those memories have become treasures. She will be deeply missed.
To send flowers to the family or plant a tree in memory of Rona Dawes, please visit Tribute Store
Wednesday
13
April

Look inside to read what others have shared
Family and friends are coming together online to create a special keepsake. Every memory left on the online obituary will be automatically included in this book.
View Tribute Book
Share Your Memory of
Rona
Upload Your Memory View All Memories
Be the first to upload a memory!
Share A Memory
Send Flowers
Plant a Tree