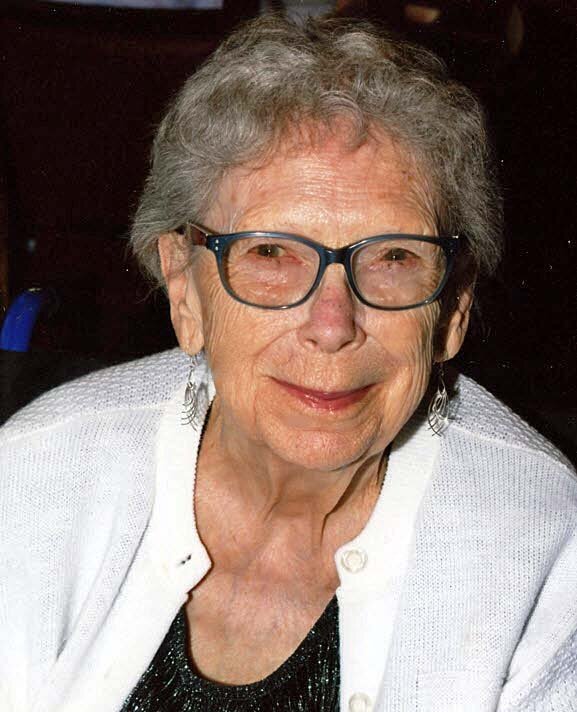 Please share a memory of Elda to include in a keepsake book for family and friends.
View Tribute Book
Elda Mae Steury danced her way into heaven the morning of June 4, 2022, after spending 34,490 days (94+ years) bringing light and joy to others during her temporary assignment here on earth. Throughout her life, she faithfully served God, worked hard, loved to have fun, and viewed life as an adventure. Elda was born in an upstairs apartment on National Street in Springfield, Missouri on December 29, 1927, the eldest child of Dossie and Opal Farris. She was 22 months old when the stock market crashed in 1929. As a child of the Great Depression, Elda grew up very poor. To save money, the family moved frequently – Elda seldomly completed a year in the same school. Although they had little, Elda said she never felt she was missing anything. She grew up playing simple games with her younger brother, Don, and sister, Bonnie, surrounded by extended family and love. As a teenager, she lived through World War II and recalled writing soldiers who threw out their addresses to the girls lining the streets to wave when troop caravans drove through town. She attended Springfield High School where she met her lifelong friend Mary Shelton – the two have remained close to this day. She graduated high school in 1946 and went to work at Southwestern Bell as a telephone operator, which involved manually patching calls through a switchboard. Her first husband, Joe Stewart, whom she married at age 19, was killed tragically in a motor scooter accident that occurred 10 days after their wedding. Elda was injured in the accident but survived. Later, Elda met James Steury, also from Springfield, on a blind date. The couple married in 1952 and moved to Oklahoma. Their union lasted 53 years and resulted in two children – Larry Edward and Linda Ellen. James and Elda spent most of their married life in Sapulpa and were 50-year members of the Double Ring class at First Christian Church in Tulsa. It was through the Double Ring class that they were introduced to square dancing, which became a 25-year passion. The couple was proud to serve one year as president of the Double Ring club and spent many nights and weekends clothed in their favorite square dance attire happily swirling to the calls of Do-Si-Do. During her life, Elda worked as a waitress and car hop, telephone operator, admission clerk at Bartlett Memorial Hospital, and employee at Security National Bank in Sapulpa, but her primary job was caring for her family. When James fell ill in 2001 with Parkinson’s Disease, Elda became his full-time caregiver, selflessly attending to all his needs for the next five years. Following James’ death, Elda lived 10 years in Sun City, Texas, which she enjoyed immensely, filling her time with group board and card games featuring snacks that indulged her sweet tooth, more square dancing, and a fulfilling social life that included many friends and neighbors. Her gentle, sweet disposition paired with an ever-sharp mind was the undoing of most opponents who dared to play against her. She served as a deacon at San Gabriel Presbyterian Church in Georgetown, but due to declining health was forced to leave this area she so loved in 2017. She spent her final five years living with her daughter, Linda, in Los Alamos, New Mexico, where she was cared for and loved by many. Elda is survived by son Larry Steury and his wife Phyllis of Austin, Texas, daughter Linda Vosburgh and her husband, David of Los Alamos, New Mexico, grandchildren Alex Vosburgh, Sarah Steury, Kelly Hoyt, and Scott Vosburgh, sisters-in-law Margaret Barnes and Mary Reed, nieces Barbara Hoaglin, Debbie Bracken, Reta Adams, and nephews Brad and Jeff Farris. She is preceded in death by husbands James Steury and Joe Stewart, brother Don Farris, sister Bonnie Hoaglin, and many other family members and friends. A celebration of Elda’s life officiated by Gary Sheely will be held Monday, June 20, 2022, at 1:30 pm in the chapel of Green Hill Funeral Home, 400 E. Teel, Sapulpa, Oklahoma. Friends are welcome to attend. In her memoirs, Elda wrote, “as I look to the future, and the time when I will leave this earthly body behind, I look forward to the next great adventure, for the best is yet to come.”
To send flowers to the family or plant a tree in memory of Elda Steury, please visit Tribute Store
Monday
20
June

Look inside to read what others have shared
Family and friends are coming together online to create a special keepsake. Every memory left on the online obituary will be automatically included in this book.
View Tribute Book
Share Your Memory of
Elda
Upload Your Memory View All Memories
Be the first to upload a memory!
Share A Memory
Send Flowers
Plant a Tree