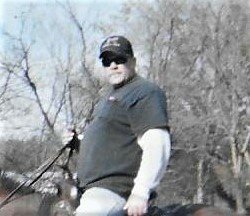 Please share a memory of Dustin to include in a keepsake book for family and friends.
View Tribute Book

Dustin attended Sapulpa Schools and received his GED From Guthrie, Oklahoma. He worked as a welder and pipefitter. Dustin was a cowboy who loved horses, country music, fishing, motorcycles and hunting with his coon hound Duke. He enjoyed fishing so much that as a kid he wanted to grow up and be a TV fishing show host.

Dustin never met a stranger and was kind to a fault. If he saw a person that he thought was hungry he bought them food. He would give anyone who needed it the shirt off his back and once gave away a truck to a family in need of transportation. He gave great hugs to those he loved, and he will be greatly missed.

Dustin was preceded I death by his father Michael Bell, his grandparents, as well as his Aunt Vicky Bell. He is survived by his mother Terry Ann Wilkinson, aunts Linda Dunlap and Jacquelyn Dunlap, uncles John Dunlap and Richard Dunlap, and numerous extended family and friends.

To send flowers to the family or plant a tree in memory of Dustin Bell, please visit Tribute Store
Wednesday
14
September

Look inside to read what others have shared
Family and friends are coming together online to create a special keepsake. Every memory left on the online obituary will be automatically included in this book.
View Tribute Book
Share Your Memory of
Dustin
Upload Your Memory View All Memories
Be the first to upload a memory!
Share A Memory
Send Flowers
Plant a Tree