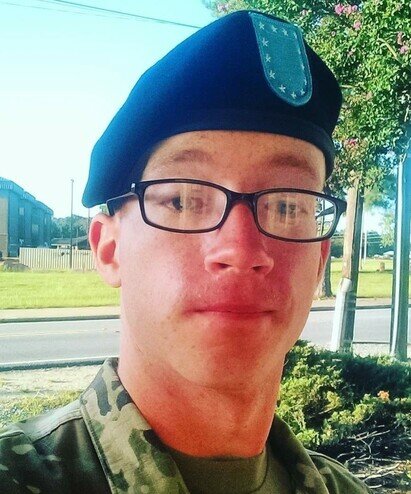 Please share a memory of Ryan to include in a keepsake book for family and friends.
View Tribute Book

Ryan attended Beggs school through 5th grade and then he moved with his mother to Sapulpa, Oklahoma in August of 2008 and began attending Sapulpa schools, graduating from Sapulpa High School in 2015 where he was known as “Ned Flanders”. After high school, Ryan joined the United States Army. He completed his basic training and AIT at Ft. Benning in Georgia. Ryan was stationed at Ft. Lewis in Washington, and this is where he met the love of his life, Marisol Vaca, and the couple were married in January of 2021. In 2020 Ryan served in Korea for 9 months and then moved with Marisol to Colorado Springs, CO and was stationed at Ft. Carson. Ryan was promoted to Sergeant, E5 while at Ft. Lewis, was awarded 2 Army Achievement Medals, 2 Army Good Conduct Medals, and medals for National Defense Service, Korean Defense Service, and an Army Service Ribbon. The couple planned to move back to Washington to live once he finished his time in the military. He enjoyed spending time with family and hiking trips with Marisol. He enjoyed the outdoors. Ryan also liked playing video games online and had several friends online he played with. Ryan was planning on becoming a Police Officer when he completed his time with the Army in July of 2025.

Ryan was preceded in death by grandparents Wallace and Carol Beck and Patsy Greenwood, along with nephew Riyley Beck. He is survived by his wife of 1 year and 11 months, Marisol Beck, mother Chery Beck of Sapulpa, OK, father Michael Beck, brothers Phillip Beck and Travis Beck of Sapulpa, OK, nephews Conner Beck, Jaxson Beck, Hoss Williams and Carsen Beck, all of Sapulpa, OK, Zayden Huggins and Ryker Beck, father-in-law Alfonso Vaca and  mother-in-law Flor Vaca of Wapato, Washington, aunts and uncles Carl Jr. and Angie Greenwood of Lavaca, AR, Les and Sherrie Greenwood of Lavaca, AR, Sarah and Richard Prena of Florida, as well as many cousins, extended family and friends. Ryan is also survived by his 2 cats Oliver and Willow.

Ryan was dearly loved by everyone, he even brought laughter to strangers with something small he would say. He was a wonderful human being, friend, son, and husband. He brought joy to everyone he knew.

To plant a beautiful memorial tree in memory of Ryan Beck, please visit our Tree Store

Look inside to read what others have shared
Family and friends are coming together online to create a special keepsake. Every memory left on the online obituary will be automatically included in this book.
View Tribute Book
Services for Ryan Beck
There are no events scheduled. You can still show your support by planting a tree in memory of Ryan Beck.
Plant a tree in memory of Ryan
Share Your Memory of
Ryan
Upload Your Memory View All Memories
Be the first to upload a memory!
Share A Memory
Plant a Tree